How Could God Take a Town Away That’s Called “Paradise”?

Fires in California have been destroyers. Lives, houses, buildings are among many of the losses from these devastating blazes. Despite people’s best efforts, wildfires keep happening in the Golden State at alarming rates.

In the most recent fire, meteorologists claim that the winds were blowing the burning flames the length of EIGHT football fields. Every. Single. Minute. There were reports of winds gusting up to 70 miles per hour and humidity levels dropping into the single digits in the areas surrounding Paradise, California. Add to that a lower-than-average rainfall, and extremely dry conditions are its result. This all spells disaster for potential fires. 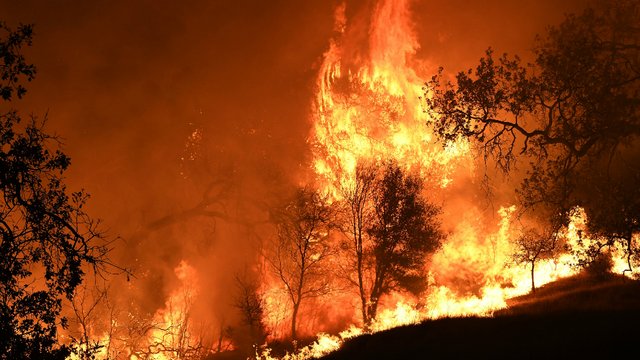 People died in their cars trying to escape the blow torch of this fire in Paradise. With one road in and one road out, there were too many cars on the road that prevented the ability to outrun the deadly flames.

My heart goes out to the victims. I can’t even imagine.

One desperate woman cried to CNN reporters:“How could God take a town away that’s called “Paradise?”

One desperate woman cried, “How could God take a town away that’s called “Paradise?” Click To Tweet

This is a common response in times of sorrow. We cry out, wondering why God would allow suffering? If God is good, then why did He allow this to happen?

But is God to blame?

According to the Sacramento Bee News, the hot, dry and windy weather conditions carry fires for thousands of acres, and “California’s urban sprawl into formerly undeveloped land is another culprit,” said former Sacramento Metropolitan Fire District chief, Kurt Henke. Where natural fires typically burn off chapperel, houses now stand. So the chapperel doesn’t get burned off, and is now easily ignited in these conditions. Paradise burned.

What I have learned in my theology studies is that God allows bad things to happen for the overriding good of free will. He doesn’t want robots. So when He created humans, even though everything is His, God allows people choices. We suffer the consequences of those choices. Because of free will, we can do great things, or we can do terrible things.

When God created the first humans, He said don’t eat from the Tree of Knowledge of Good and Evil. The consequences to eating from this ‘knowledge tree’ was death. God warned them, but they went their own way regardless of the consequences (and we’ve been doing that ever since). We then got kicked out of Paradise, the Garden of Eden, and we’ve been trying to get back in ever since by creating systems of government designed to alleviate suffering.

The problem of evil and suffering is a huge stumbling block for people. It causes some to lose faith in God or some to never even consider God. They argue God can’t be good if He allows so much pain and suffering. Yet when we look at the narrative throughout history, the biggest perpetuators of suffering are people themselves—we merely need to look in the mirror to find the evil within.

This is why Jesus Christ came to save us. Not only did He die in our place, to pay the penalty for our sins, He came to show us what it’s like to be truly human: to love others and esteem them higher than ourselves; to pray for our enemies, and forgive those who seem unforgivable. He calls us to such high standards that without His help, we could never achieve it. Thank God, we don’t have to do! When we believe in Christ, His Spirit comes to live within ours, and the process of becoming more Christ-like, and ultimately more human, begins. This is a profound mystery, but in my thirty-plus years of being a Christian, it is one I’ve witnessed time and time again—people get better when they let Jesus inside.

Again, my deepest condolences to the victims in this fire, and those fires yet to burn. We must try, as best we can, to care for everyone during tragedies because in doing so, we are “loving our neighbors as ourselves.” (Mark 12:31.)

AT&T and the American Red Cross are partnering to help. You can choose to donate to “California Wildfires” or other causes at, or by texting “CAWILDFIRES” to 90999.

Side note:The American Red Cross is a Christian organization. Many of the relief organizations throughout the world are based on the Christian worldview (i.e. The Salvation Army, Samaritan’s Purse, World Vision, Compassion International, International Justice Mission, to name a few.)

Please remember that the next time someone tells you religion has done more harm than good; they need to be corrected (to start, tell them about these organizations), as they’ve bought into rhetoric that is simply not accurate.

Today, the town of Paradise burned. That can’t be undone. But for those remaining, when we turn towards God, He can make beauty out of ashes (Isaiah 61:3). He certainly did that in my life. He can in yours, too.