“Get Rid of Religion!”

The battle cry of critics when Christians go wrong

Anytime a Christian leader, be it the Pope or an Evangelical preacher, commits a sin, it reflects poorly on the whole Body of Christ. We are, after all, in this faith together (1 Cor. 12:27). Believers are part of a bigger picture, a meta-narrative called the Body of Christ, and so there are consequences to the actions of one part of the body that, in turn, affects another part. However, to throw the baby (Christianity) out with the bathwater (the terrible behavior of some), is simply not thinking things through fairly.

Commenting on the recent news that the Pope has allegedly been covering up sexual sins in the Catholic Church, one person said that “the face of the Pope was the face of Christianity, and it’s pretty ugly.” This idea is perpetuated by skeptics who often use instances when a Christian leader sins to claim Christianity is a “blight to all of humanity”, and then continue to blame all kinds of societal ills on religion. Declaring that Christianity is ugly based on the actions of the Pope is appealing to prejudices surrounding a perceived source or context. It’s like President Trump claiming mainstream media is “fake news.” Not all news is fake. Likewise, what’s true of one Christian leader isn’t necessarily true of the followers.

Nonetheless, it is important to defend Christianity in times like these, when any influential Christian leader, be it in the Catholic Church or wherever, does something contrary to what Jesus taught. Most agree that there are many Christians who would NEVER do the things the Catholic church is allegedly covering up, including many Catholics themselves. Yet, Church history is full of broken people trying to figure it all out, and often Christians don’t do what Jesus instructed. But just because some believers do bad things some of the time, doesn’t mean ALL Christians do bad things ALL the time. To claim that Christianity is a “blight to humanity” based on the Pope’s supposed moral failure is taking what one man may have done and lassoing all believers into that same corral. That is not fair, nor is it true.

What Christianity has done for society

Despite those who criticize, Christianity is anything but a blight to humanity. It’s important to note that Christians, in general, have done more good than harm historically. For example, Monasteries were places where the idea of the “university” was formed. Harvard, Yale, and many of the Ivy League colleges today were established by clergymen and ran by them for years. Religion has always factored into education (until recently when secular thought has gripped public education).

Christianity is also responsible for establishing the first hospitals and hospices in the fourth century to care for the poor, the widowed, the sick, etc. Matter of fact, the human rights movement is based on the foundational Christian concept that all people are created equal simply because we are made in the image of God. This establishes inherent value to ALL human life, and has been the impetus for the creation of such organizations like the Salvation Army, the Red Cross, and the International Justice Mission (a non-profit organization that is currently fighting the battle against the sex-slave trade).

Matter of fact, Christianity goes even further than promoting the basic right of equality. When practiced as the Bible teaches, God’s Word teaches that not only should we view others equally, we should consider others as more important than ourselves. As Christians, we are encouraged to not only look out for our own interests, but also for the interests of others. (Philippians 2:3-4.) Of course, Jesus was the perfect example of this. Why do you think his disciples balked when he leaned down, as a mere servant, to wash their feet? They thought that was beneath him, and did not understand that Jesus was showing them the best way to live and to be in community: serving one another out of a selfless love. (John 13:1-17.)

What happens when Christianity is removed from society 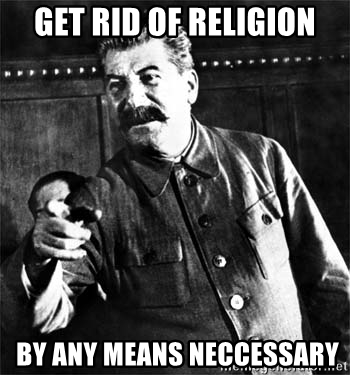 So, when Christians do bad things, the knee jerk reaction of some in secular culture is to cry foul on the entire belief system, demanding its dismissal. Yet, if you remove God from society, then what will take its place to validate that basic human right of equality? It’s being created in the image of God that makes all people have value. Take that away, and see how society functions: communist dictators are typically its result. Just review the 20th Century wars to see this happening in many countries like Russia, China, North Korea, etc. Historically, when society has rejected God as its transcendent source of moral goodness, flawed governance takes the place of God; a choice proven to be a horrific replacement (i.e. ethnic cleansing, imprisonment of ‘enemies of the State’, mass genocide, etc). Ridding the world of Christianity is not the solution.

What is the solution?

Christians sometimes sin, succumbing to the lures of destructive desires. When this happens, it does tarnish the reputation of Christianity; after all, Christians are supposed to show the world a better way to live. This is why believers must maintain a close relationship to Jesus, the source of our goodness and the One who makes us want to be better. It’s His goodness that makes us good. It’s His power, through the Holy Spirit, that can change our sinful desires to desire righteousness. Keep this in mind the next time a Christian leader does harm: when he fails, he first fails Christ. It is a sign that he has forgotten his first love, a love that must be grounded in intimacy with God. A close relationship with Jesus produces good works in a person’s life, and these works should never intentionally harm another person.

When people of faith do terrible things, skeptics may demand an “end to faith!” However, to attempt to rid the world of religion is a form of mind control – you cannot govern the minds of men – and it is the fool who wants such control. Christianity, on a larger scale, has done much more good for humanity than harm. And remember that Jesus is the true face of the Christianity (Col. 1:18), and if that face is perceived tainted, it’s not His fault. Instead, it’s the abuse of the gift God gave us—free will.

The solution to these problems lies in a close relationship to God and to other Christians. We need to put God first, and then keep friendships with others who will help us in our commitment to Christ. We need to confess our weaknesses, believing God will help us. We need to be authentic, open and honest with one another, and pray for all Christians, especially Christian leaders, to finish this journey of faith strong.